Maintaining the global warming lie is getting harder and harder 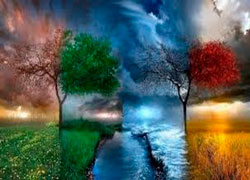 Top-Cited Dataset Reveals that of 68 Global Warming Models, Earth's Observed Temperature is BELOW 67 of them

The claim by the Biden Administration that climate change has placed us in a moment of “profound crisis” ignores the fact that the energy policy changes being promoted are based upon computer model simulations which have produced average warming rates at least DOUBLE those observed in the last 40+ years.

This is according to Dr. Roy Spencer, climatologist and former NASA scientist, who also points out that just about every climate claim made by politicians, and even many vocal scientists, has been either an exaggeration or a lie. Real-world observations are in stark disagreement with the “official” climate models being promoted for the purposes of implementing expensive, economically-damaging, and poverty-worsening energy policies.

Let’s take Global Ocean Temperatures as one example–with SSTs providing our best gauge of how fast this supposed extra energy is accumulating in the climate system. The 42 years of observations since 1979 (bold black line on the chart below) shows that warming is occurring far more slowly than the models said it would: the ERSSTv5, one of the top-cited datasets, reveals that Earth’s oceans have warmed at ≈50% the rate official climate projections foretold. In fact, there has been barely any warming as of the latest datapoint, plotted on March 2021: 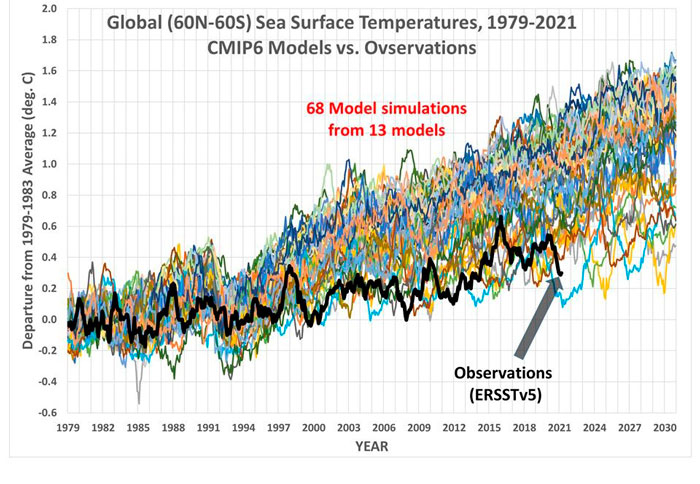 68x CMIP6 climate model simulations of global average sea surface temperature (relative to the 5 year average,
1979-1983), compared to observations from the ERSSTv5 dataset (aka the reality)

To put it even more clearly –so alarmists can take it in– of the 68 model simulations that have been generated over the years, 67 are ABOVE the current observations, with the majority significantly above, by over a full 1 deg. C in some cases.

The global warming hypothesis has failed, that is clear for all to see, but criminally, it isn’t science that’s propping the charade up, at least not any longer; this is a political movement, and one that after decades of relentless indoctrination now has a large percentage of western populations fooled and radically onboard.

Helpfully, Dr. Spencer has provided us with another graph that might drag a few ‘brainwashed pawns’ back from that precipice. In terms of the linear temperature trends since 1979, the image below shows that the 2 top-cited ocean temperature datasets have trends at the bottom range of climate model simulations: 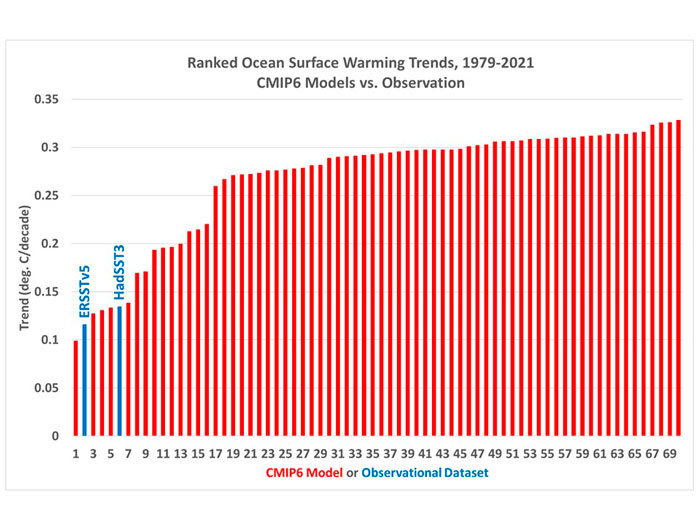 This should be a ‘head in hands’ moment for the climate modelers, but humility has never proved their strong point.

Deep ocean warming could be natural

A related issue here is how much the deep oceans are warming.

The inarguable energy imbalance associated with deep-ocean warming in recent decades is only about 1 part (less than 1 Watt per sq. m) in 300 of the natural energy flows in the climate system. This is a minuscule energy imbalance. We know precisely NONE of the natural energy flows to that level of accuracy, writes Dr. Spencer, meaning global warming could be mostly/entirely natural, and we wouldn’t even know it:

“[There is a] level of faith involved in the adjustments made to climate models, which necessarily produce warming due to increasing CO2 because those models simply assume that there is no other source of warming. Seldom is the public ever informed of these glaring discrepancies between basic science and what politicians and pop-scientists tell us.”

Dr. Roy Spencer concludes: “There is no Climate Emergency.”

The COLD TIMES are returning, the mid-latitudes are REFREEZING, in line with the great conjunction, historically low solar activity, cloud-nucleating Cosmic Rays, and a meridional jet stream flow (among other forcings).

Both NOAA and NASA appear to agree, if you read between the lines, with NOAA saying we’re entering a ‘full-blown’ Grand Solar Minimum in the late-2020s, and NASA seeing this upcoming solar cycle (25) as “the weakest of the past 200 years”, with the agency correlating previous solar shutdowns to prolonged periods of global cooling here.

Furthermore, we can’t ignore the slew of new scientific papers stating the immense impact The Beaufort Gyre could have on the Gulf Stream, and therefore the climate overall.