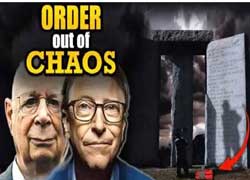 The Georgia Guidestones was a mysterious monument carved into ten “commandments” for a “New Age of Reason”. The first commandment? Keep the world population below 500 million people.

Ready for another sinister fact? The authors of what was called the American Stonehenge are still a “mystery” … except for the insiders. In the video, we look at the numerous features that defined this monument, its dark message calling for a New World Order, and explain why the occult secret society that built it decided 2022 was the year to take it down.

Why The Globalist Elite Had To Destroy the Georgia Guidestones

Made of four massive slabs of pyramidal blue granite, the Georgia Guidestones stood 6 feet high and formed a mysterious landmark in Elberton County, Georgia. While the eye-catcher was odd enough to attract attention from afar, the text on the stones was the most interesting. On the granite slabs were engraved ten “commandments” or “guides” in eight different world languages.

At the top of the structure is a shorter message inscribed in four ancient languages: Babylonian, Classical Greek, Sanskrit and Egyptian hieroglyphics. It is important to note that these last four ancient languages ​​are of great importance in the teaching of occult secret societies, such as the Freemasons and the Rosicrucians, groups which we shall discuss later. 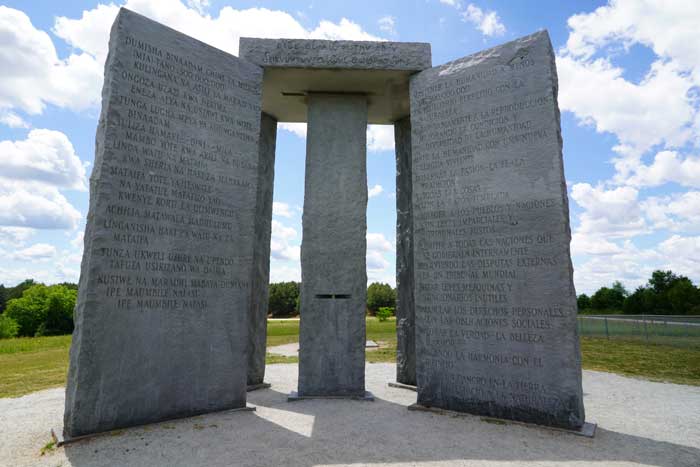 These guides cover topics associated with the “New World Order,” including mass depopulation, a single world government, the introduction of a new kind of spirituality, and allusions to human reproductive control and eugenics.

The text of the Georgia Guidestones reads:

Don't you see anything terrible? However, it was the very first official guide that made the Guidestones so controversial:

To get a population of less than 500 million, humanity has to be reduced by about 94%. Therefore, the Guidestones were considered concrete evidence of the importance of the elite in mass depopulation.

Does this sound familiar? Anyone who has paid attention in recent years has noticed that the elite are fixated on this issue.

And Gates is not alone. The World Economic Forum, led by Klaus Schwab, has made clear its plans for humanity. Schwab's right-hand man, Yuval Noah Harari, recently stated that the WEF views the vast majority of the human population as useless and redundant.

According to Harari, the so-called “ordinary people” are rightly afraid of a future in which they will be made “superfluous”. That fear is justified, said Harari, speaking on behalf of the elites, affirming: "We just don't need the vast majority of you."

Harari's comments are deeply disturbing because when placed in context with comments from other WEF advisers such as Bill Gates and Jane Goodall, it becomes clear that the Georgia Guidestones "commandments" are being followed by a global elite.

It's almost like they're reading a script straight from the granite slabs of the Georgia Guidestones.

And if you're wondering who will be the lucky ones to survive the great depopulation, the WEF has an answer for you. Surprise, surprise: it is the global elite that will survive the mass extinction thanks to what Yuval Harari describes as a “technological Noah's Ark”.

That said, the Guidestones have now been relegated to history. Before explaining why they were destroyed, it is worth taking a moment to consider the destruction.

Over the years, the monument attracted much attention from both worshipers and detractors. The monument was the site of strange rituals and gatherings of pagan and occult groups – often on dates with astronomical significance. It was also the target of vandalism as satanic symbols and messages against the New World Order were sprayed on the structure on numerous occasions.

The explosion reduced one of the slabs to rubble and severely damaged the capstone. After the blast, a car was filmed leaving the scene. The Georgia Bureau of Investigation said in a statement that it is investigating the explosion with the Elbert County Sheriff's Office. 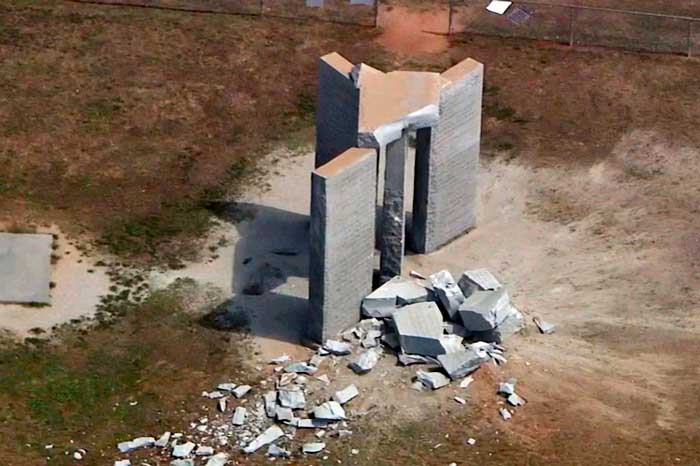 A few hours later, the structure was completely demolished for “safety reasons”.

While the real Stonehenge is still standing after 5000 years (there are also doubts), America's Stonehenge, with its guides to a new world order, only lasted 40 years.

In 2013, Wyatt Martin, the man who helped arrange the monument, said:

“I made an oath to that man, and I cannot break it. No one will ever know.”

That said, for those in the know there was never a "mystery" about the people behind the Guidestones. They always hid in plain sight.

The pseudonym of the mystery man Wyatt Martin referred to was “RC Christian.” This is a rather blatant reference to Christian Rosenkreuz, the legendary founder of the Rosicrucian Order, also known as the Order of the Rosycross (RC) – a secret society that played the role of hidden hand and greatly influenced world events for centuries.

Everything about this monument pointed directly to the occult elite and the secret societies that fuel its philosophy. Although the monument is gone, the New World Order ideals behind it are not. These ideals have existed for centuries.

In the 21st century, however, things have changed.

While the masses were once completely ignorant of the agenda of the global elite, the information age has caused a massive awakening. Now the plans of the occult elite are meeting more and more resistance and opposition.

The true intentions of the globalist elite—including world government, depopulation, and eugenics—were literally set in stone for all to see.

That is why the Guidestones were demolished. The elite no longer want us to know about their long-term goals for humanity.

Unelected global elites, led by Bill Gates and the World Economic Forum, are carrying out all the commandments of the Georgia Guidestones.

Today, they try to hide their true intentions behind layers of gibberish, nonsense, corporate-speak and propaganda to keep the masses in the dark where they think they belong.

But while the Guidestones are gone, the ten "commandments" or "guides" standing on the granite walls continue to shine a light on the dark deeds of the elite and explain their true agenda.

It is important that we share this important information and wake up as many people as possible. This is the only way to defeat those who want to usher in a New World Order, with all its consequences.

We're all in the same boat.